Git is a powerful tool for lots of tasks, it makes a wonderful VCS that can drive easy utility and automation.  Recently I used git and remote repositories to deploy code & data fanned out to multiple locations.  Here are some examples along with using Etckeeper, a related wrapper tool for revision control around git (or other VCS) with some extra features.

Remote Repositories in Git
Sometimes you want to keep multiple copies of your data across one or more repositories in git, you work with a primary repository but want a remote clone elsewhere (for redundancy or read-only purposes).

This works easiest with newly created remote repos, add them all with the git remote command and sync your branch outbound.

You should see your new remote branches added:

You can add as many remotes as you want, and any commits to the current repo will fan out to the remotes with a git push.  This might be useful with a script to auto-commit backups, and If you manage flat files only when changes incur will anything be committed.

Etckeeper provides a useful wrapper and extra recovery sub-tools around git.  The default behaviour is to manage the /etc/ directory and commit updates as content changes, including some basic RPM or Apt package reversion capabilities.  This could serve as an extra layer of configuration file revisioning and reporting.

Etckeeper will also provide the following features you won’t get with barebones git + cron or something similiar: 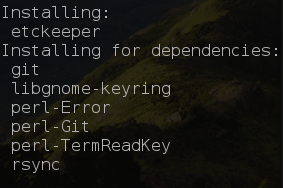 If you want to have Etckeeper create and manage your /etc/ files:

Edit etckeeper.conf to PUSH_REMOTE=”origin” or tell sed to do it, you can add multiple repositories with spaces.

Add a remote branch like we did earlier to copy your data changes.

By default a cron job is set to run it once a day.  That’s fine for most people so skip on.  To disable this and use systemd instead uncomment AVOID_DAILY_AUTOCOMMITS=1 in etckeeper.conf and enable the timer:

You should start to see automated commits when files in /etc/ change or your package database is modified.

When using your package manager you should also see the etckeeper plugin.

Etckeeper has built-in sub commands for easy reversion to previous git copies of your data, Vultr has a good guide that goes more in-depth with etckeeper git recovery sub-commands.

Etckeeper has some useful wrapper commands around git internals, for example if you want to check and revert a configuration file from the auto /etc/ git backup:

Check the git log where the change was incurred 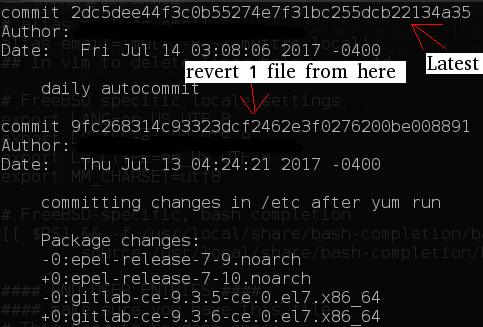 Obtain the git commit hash of the last change that altered something you want to revert.

Now only /etc/someconfig will be reverted from the last change.

For managing content besides /etc/ use the -d option.  This could useful for sub-directory level revision control.

Add any remote repositories to push to as needed:

If you want to automatically have Etckeeper push after ever new commit:

You can tie this into cron if you like, or alias the command.

Extending Further
There is a lot you can do with git and automation.  I won’t even come close to covering a fraction of it here.  You can do a lot with just utilizing branches of git for different environments but still share a common codebase, or promoting infrastructure code (Ansible, Puppet, etc) to production by tying things into code review like Gerrit.

You can also use git post-hooks to combine this with multiple, remote repositories or triggered via Etckeeper to extend usage even further.