Urban Terror is a free first person shooter based on the Open Source Quake III engine that advertises itself as a “Hollywood tactical shooter.”  It’s native for Linux, Mac and Windows like Enemy Territory, but uses realistic weapons, damage models and terrain.  It’s been in active development since 1999.  Here’s how to get started.

How to Install
Installation is simple: download the full game for Linux, Windows or Mac and extract it somewhere.  Here’s a direct link for 4.3.4 as well.  Extract the appropriate archive (this archive contains Linux, OSX and Windows files).  Note, this is 1.4Gb.

How to Play
To play the game simply run the equivalent Quake3-UrT, in my case that was Quake3-UrT.x86_64.  It also supports HD resolutions without any additional trickery – I was able to get 1920×1080 resolution within the options menu on Fedora 22 x86_64 and my Nvidia Geforce 560.  It also plays great on my 4K LCD UDH TV at 4096×2160 using custom resolution in the settings.

UPDATE: There is now an ioQuake port of  Urban Terror with the ioquake engine, it’s vastly superior to the one included in the game.  In the updater it should give you an option to try it as beta, but you can simply replace your binaries with the latest pre-built ones using this new engine.

On Windows and Mac OSX the Urban Terror updater has the configurable option of choosing ioq3-m9 as the game engine (recommended, it looks great). 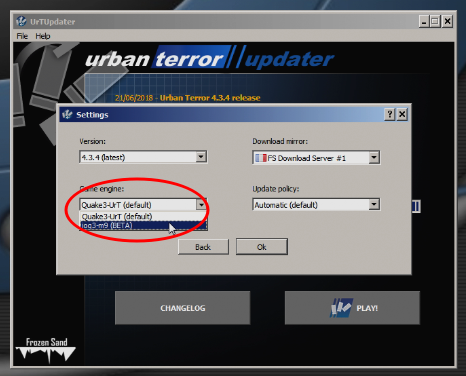 On Linux or other platforms you can also just find the latest build for your platform here, then run it as you would normally run the Quake3-Urt.x86_64 binary above.

Gameplay Highlights
Urban Terror uses realistic, current-day weapons with sounds that are close to what the actual weapons sound like.  My favorite feature is locational damage – depending on where you’re hit or you hit your opponent they suffer varying levels of damage and immobilization.  For example, if shot in the leg area you will walk with a limp at a slower rate.

Your opponents will also leave a blood trail and bleed out from their wounds at differing rates depending on where they are injured until they bandage themselves or a wounded team-mate (q key, changeable in settings).

Note: when you bandage yourself you don’t actually heal you simply stop the bleeding but depending on where the would is located it’s imperative to immediately seek cover and bandage to avoid further blood loss and damage.  When you bandage a team-mate they gain a slight amount of health back.  Lastly, blood splatter from exit wounds seem realistic which is a nice touch. 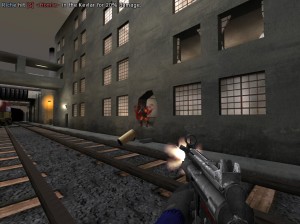 There are also a dozen or so game types such as capture the flag, free for all, team survivor, capture and hold etc.  You can find a full list with descriptions here.

Update:  Here’s some testing on 4.3.4 using the IOQuake-m9 engine, notice the differences:

Gameplay Tips
The default color/uniform of the teams is red and blue, but you can change how you and your team look as well as the enemy.  This will only affect how you view things (and it has to be allowed server side, which is the default).

To change the color of your model to black, type ~ to bring up the console and enter:

If you wanted to change your enemy to say .. A Clockwork Orange “Droog” suit:

A full list of color codes can be found here.

Useful Keys
These can all be changed in the controls settings, but important ones to note are:

Weapons and Accessories
Urban Terror is based around loadouts, similiar to other FPS games.  You’ll get a choice of primary weapon, secondary, and one or more utility slots.  Some people opt to go without a secondary weapon (pistol, etc). to maximize accessorie slots like extra ammo, kevlar or a helmet.  Personally I just pick whatever is the most fun and don’t care as much about the absolute best setup.  Below you can see the loadout screen and a utility item like nightvision goggles. 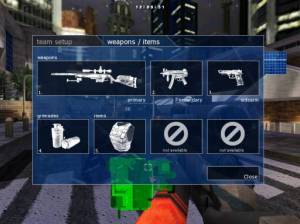 Here are some useful sites with weapon accuracy statistics and general tips:

Linux Fix:  Unable to Download Maps
There’s an issue with later versions of libcurl and newer Linux distributions shipping anything higher than libcurl.so.3.  The curl library is used to fetch 3rd party maps from servers, so if you get the error cURL library could not be loaded here’s the fix.  Open the game browser window by typing ~ and enter following (that corresponds to your libcurl version)

Running a Server
It was also trivial to setup and run a server.  There were a few good guides available.
If you plan on running a server it’s a good idea to enable the new auth system, which provides some benefits like reputation and global cheat/ban listing – you can register for it here but it’s not necessary to play or run a server.  Note:  servers with the auth enabled server-side your server will be more visible in the server browser window.

Play on Funcamp Servers!
I’ve set up a United States server and a European server to play on, come check it out.
You can also chat with the admins on IRC via the Freenode IRC Web Client.

Start the game and type the ~ key to bring up the game console and enter:

If you are located in Europe, you might want to join the server in Ireland:

Server Details
Due to limitations in html2ps sometimes the generated server stats images don’t render if there are too many players listed in the recent players area.  You can find the direct, updated HTML server statistics here:

U.S. Team deathmatch running on CentOS Linux, stats are updated every 3 minutes via a script.

EU Team Deathmath running on CentOS Linux, stats are updated every 3 minutes via a script.