In my previous post about Enemy Territory I mentioned an active, maintained fork of this infamous Splash Damage WWII RPG-shooter from the mid-2000’s.  I found time to install, play and setup servers for Enemy Territory: Legacy – If you’re looking for a fun, free Open Source class-based FPS this is it.

Installing ET:Legacy:
The installation process is much more modernized and straightforward than the older, retired original ET.  If you’re on Windows or OSX simply download the appropriate files, copy the original ET 2.60b pak3 files in ../etmain and off you go.  Proceed down to the post-installation steps for tips to help you get started.

Installation on Linux
We’ll be installing the 32bit version on Linux.  Run the following commands in a terminal as your normal user.  Substitute your ~/Download directory for wherever you want the game installed.  Note the differences below.  You can install both 32bit and 64bit on the same system as they’ll go into different directory paths.

Obtain the Game – 32bit Version
This is recommended since you can play on ET servers running fun 32bit mods like No Quarter.

You may also need some 32bit libs, on Fedora 25+ this was needed also:

(optional) Obtain the Game – 64bit Version
As ET is really light on resources comparatively, you really just need the 32bit version but there is a 64bit version.  The only downside is that you can’t play 32bit mods which really limits the number of servers you can play on.  If you want to stay pure this is a fine option as you’ll be able to play on any ET:Legacy server.

Install the Thing
Next you’ll want to extract the tarball archive you’ve downloaded, if you want to install both 32bit and 64bit from above you’ll need to duplicate this step for the other tar.gz.

You’ll need the Enemy Territory asset files if you don’t have them, these go into ../etmain/ directory.  You can get them here or just download them from me (208mb).  These are the pak3 files from the original Enemy Territory.

(I’ve moved the WolfET assets to github above, but a mirror is here).

Copy assets into your ../etmain directory and extract (you’ll need to copy these into both the 32bit and 64bit installations if you opted to install both):

Here are the md5sums for the asset files:

Inside the etlegacy-v2.76-i386 directory you’ll have a set of binaries – the etl binary launches the game.  Comparatively, the etlded binary is used for running a dedicated server. 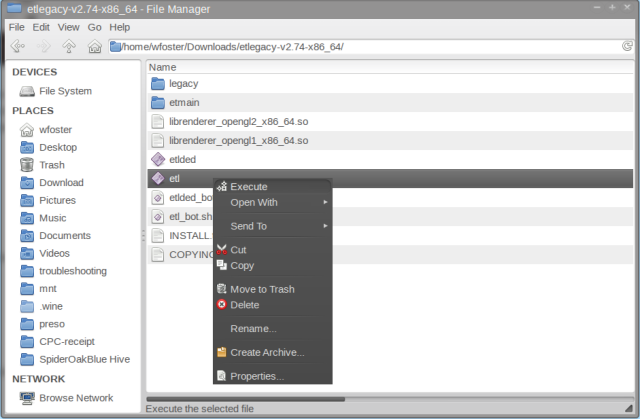 Post Install Setup
When you run etl for the first time it will create a profile for you, this will generate an etkey which makes a unique UID for your player so servers with experience save enabled can save your progression.

Known Issues: libGLU.so.1
If you get an error about this missing library:

You need to install the 32bit mesa-libGLU library.

Known Issues:  MESA-LOADER warnings
You may also need this package if you see the following error:

Known Issues: OpenGL Error
Some people report issues with turning on Anti-Aliasing, I was able to reproduce this with an Nvidia graphics card on Linux.  If you get the following error you need to not enable Anti-Aliasing:

Fix:
Rename your etconfig.cfg and start the game without, this will revert your settings to default but let you get back in the game to set things up again.  For me it was this:

You could also try running the game in windowed mode as an option:

Known Issue: ET is too Dark on Linux
With some display drivers (intel for me) ET can seem too dark, and the UI settings don’t seem to fix it.  Here’s the fix that worked for me.  Type ~ to bring up console:

You may also need to need to set:

Gameplay Information
There are many good guides on Enemy Territory, but in a nutshell it’s a class-based first person shooter game – each class plays a particular role.  In objective-based games each class plays a certain part in achieving the team goals to win the map.

You accrue experience points playing various classes and performing actions as that class and the rewards, or “levels” are in the form of perks, additional weapons and abilities which are signified overall by progression through military ranks.

Military ranks are explained here, along with relevant class perks and skills.

Here’s some footage captured via OBS Studio on Fedora:

Here’s some action on some of my servers – Saving Private Ryan.

Here is ET: Legacy with the No Quarter mod on another one of my servers.

There hundreds or more ET servers to play on and people are routinely adding more – be sure to filter by “legacy” mod.  I’m running three servers currently, two in Europe and one in the United States.

Below is the status of the European Objective-based ET:Legacy server.  I’m unable to display either United States servers in an image because of limitations with image2ps and the sheer amount of bots on it.

Below is the current status of the European ET:L NQ Server running the No Quarter mod.
If it fails to render below it’s also because of image2ps and characters exceeding canvas limit.

Leave a Reply to Will Foster Cancel reply