I recently came into possession of a Logitech G933 wireless headset and started using it on my Linux work laptop for 100% of my audio and video conferencing needs.  There were a few issues out of the box on Linux but I managed to get it all working.  Here’s what I did and my experiences with the hardware.

G933 Wireless Headset
The Logitech G933 is the predecessor to the G930 released a few years back, it supports a USB dongle which emits a wireless signal to the headset plus other separate audio channel inputs.  If you turn off the light scheme (via their Logitech Windows-only software) you’ll get around 10hours battery.

If you want to use it across several computers or game consoles as you can easily swap the USB wifi dongle between machines or use 3.5mm audio connections in tandem.  My focus is using it for wireless audio and mic for work on Linux.

Linux Fix: USB Quicks Module Option
Like most Logitech gear the usbhid module picks this up and it works out of the box with one small fix.  There’s a bug that causes you to sometimes lose keyboard input when the USB wifi dongle is plugged in if you adjust volume via the adjustment wheel.  Apply the following and reboot to fix this:

Update: The usbhid quirks line above disallows the module from binding to the device, on my headset I had to add this for things to work all of the time but your mileage may vary.  I’m adding it in here for posterity, remove this line if you have issues.  Thanks to ashkitten for pointing this out.

Linux Fix: PulseAudio Configuration
Afterwards, it should come up as a viable audio and mic device.  I’ve needed to install and run the pavucontrol program to control what applications use it via PulseAudio like below as I’m using XFCE with KWIN and it doesn’t have windowmanager-specific PulseAudio control. 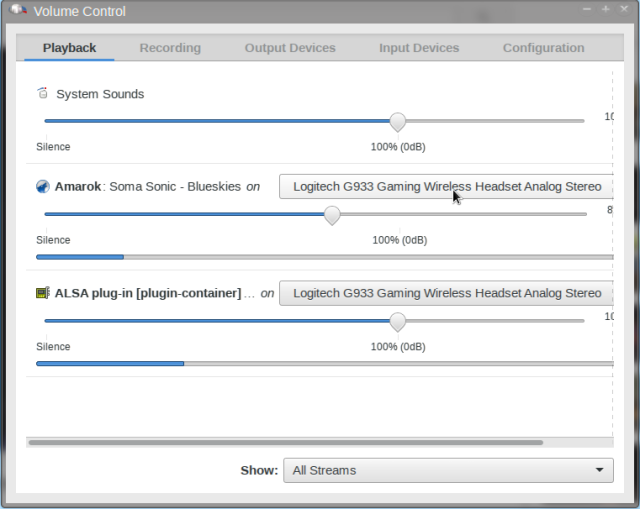 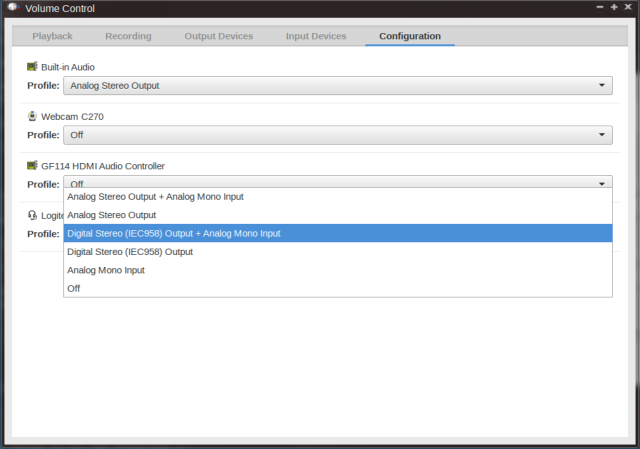 Note above, you’ll also want to make sure that the Logitech G933 profile is set correctly with both an output + input option.

Toggle Pavucontrol Profile = Fixes Things
In general, toggling between profiles like above will “fix” any issues you have with most sound problems in applications.  It’s not ideal but it’s the best workaround I have until I have enough information to file bugs upstream against PulseAudio or the snd_usb_audio kernel drivers.

Linux Application Usage
Note that some applications require you setting the G933 manually in the application, below are common applications I use and where I changed them.  Generally, if an application supports PulseAudio Sound Server (default) then that’s enough and it will work without further modification.

Controlling Volume
Controlling volume settings will either be by using the sliding volume wheel on the headset itself or you can manage them independently inside the application within pavucontrol.  The latter is preferable (if there’s an option for it) as it lets you set a series of independent volumes for application audio.

Settings via Logitech Software
You can further customize the headset via Logitechs gaming software, however it’s Windows-only and wine does not run it correctly for me.  If you can find a Windows PC it’s useful to install it and turn off the color schemes (30% battery savings!), set it to use Dolby 7.1 sound and remove the software and never touch it again.

Using 3.5mm Audio Pass-Through
A friend of mine, Aaron Thomas suggested using the 3.5mm audio jack located on the wireless USB dongle to simplify things.  This seems to work well as wireless connection between headset <-> dongle is a simple point-to-point connection, and you can simply jack in an 3.5mm cable into the dongle and run that to a headphone or audio port.  This might be useful for non-computer devices like a TV.  Also of note, you simply need -any- USB slot and then run the cable, it doesn’t have to be to a device you’re using – useful to extend range as well. 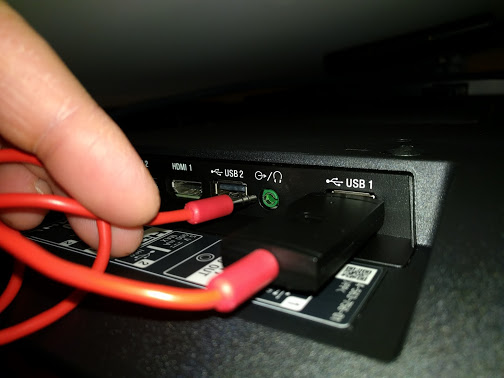 Fix: Turn it off and on again
Sometimes after suspending my desktop, some applications will stop seeing the Logitech G933, in this case simply pulling the USB dongle and plugging it in again “fixes” things.

Fix: Static and ‘Scratchy’ Audio
I’ve noticed that after having these a while every few weeks/months or when I reboot I’ll sometimes get scratchy audio.  It seems to only be localized in the headphones as it’s not apparent in recordings.  One other Linux user who has these experienced the same thing.  The following resolves this for me:

Summary
There’s a few irritating things about the headset, and lots of things I like.  $200 is in the more expensive range for a 7.1 wireless headset but it’s quite useful with long wireless range and great battery life, if you use a headset/mic frequently and these features are important you may be able to overlook the other shortcomings.

Totally arbitrary, non-scientific score: 72 out of 100

Update on 5-minute Cutoff
Twitter user Raton-Laveur reports that the latest Logitech firmware update provides the ability to disable the automatic 5-minute shutoff, but Windows is required to apply it. 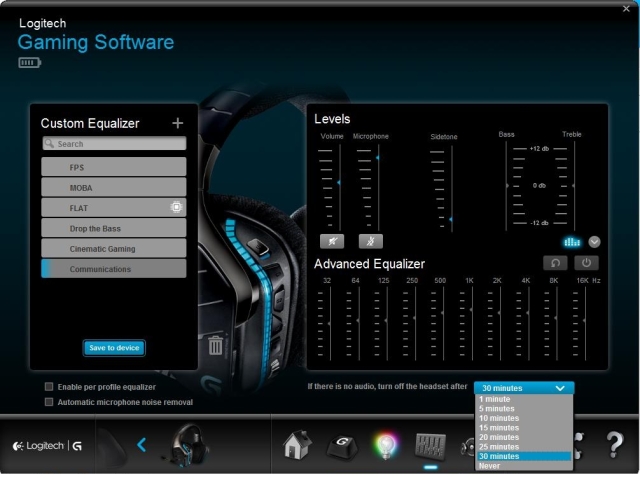 Possible Firmware Update Issues
Some users reported issues with the latest firmware soft-bricking the device if it crashes during update but there’s a manual workaround posted on the Logitech forums to force-update it using the MSDOS prompt.

Update: 2016-10 – Headset Not Turning On
After 9months of mostly happy usage my Logitech G933 started acting funny and eventually refused to power on.  Luckily I found this Reddit thread which has a “fix”, you’ll need a Windows machine for this:

The firmware should update, after it’s done you should be back in business.

Update: 2018-12-05 – Microphone muted when pulled down
After another two years of usage it appears that there is now some bug where if the microphone is pulled down it still stays muted.  I have applied the firmware 9.8.3.27 that came with verion 9.0.2 of the Logitech Gaming Software.

The same approach applies above for applying firmware:

Note, you may also need to check alsamixer as sometimes the volume can be turned all the way down.  Select the headset with F6. 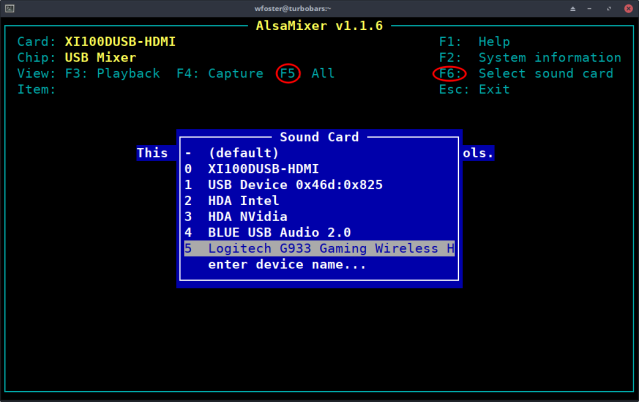 Next, press F5 to view all controls.  Use the <- -> arrow keys to select the microphone and use arrow key up to increase volume.  Press escape to save/exit. 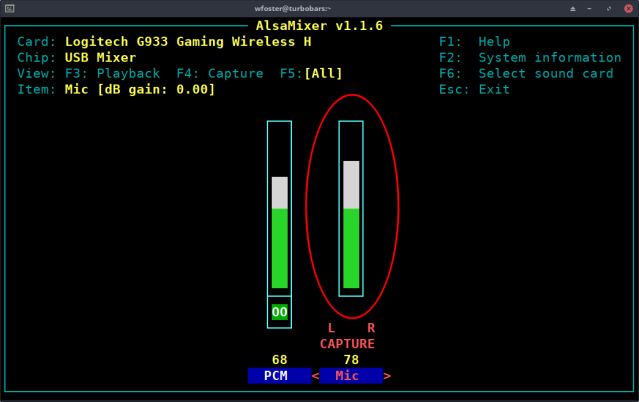